An 18-year-old man has been charged after a report of a vehicle towing a couch in Gooseberry Hill yesterday.

East Metropolitan Traffic Police have alleged that the man was driving a Holden Commodore sedan on the Zig Zag Scenic Road around 11.30am towing a sofa with two youths sitting on it.

A crowd had gathered to watch, with one person filming the event on a mobile phone.

The Kalamunda man has been summonsed for reckless driving.

Good to see our police are keeping busy.

Clear, Concise And Stolen From Bingley: The Credit Crisis

In response to the assertion “Lenders created loan programs knowing that the people who bought them could never afford to pay them back.”, Mr. Bingley of the Coalition of the Swilling scribed this magnificent response. Read it in full, it’s very excellent.

But the key reason is why? That certainly makes no business sense, does it? I mean, the last thing in the world the mortgage company wants is your house. Houses are a pain in the ass and cost money to maintain and are not as ‘liquid’ an asset as a financial company wants. No, they want the easy simple route of the checks coming in. Clean and sweet.

So why did they make the loans? Because while one of the things companies like most of all is a good profit, the thing that companies, and frankly all of us, really like is a guaranteed profit, and that’s what this was. I’ll explain in a second, but first, here’s the general theory: In spite of what you hear coming out of Washington, this crisis is not a “Failure of a Free market” but in fact was created by Government regulation and interference in the free market.

END_OF_DOCUMENT_TOKEN_TO_BE_REPLACED

The Pennsylvania Lottery promotes a new lottery game with people dressed up in totally unambiguous costumes that no one could possibly mistake for anything other than what was intended.

The slogan ends with “…in your hand” 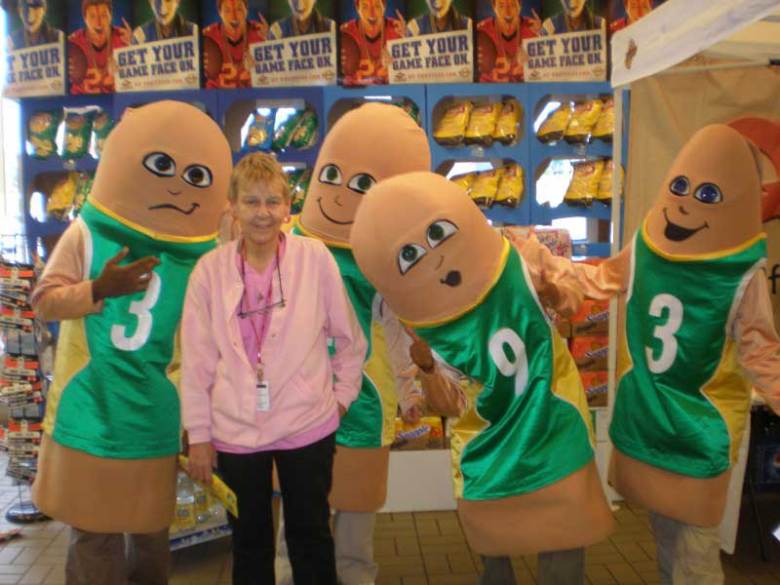 This is the best of all possible outcomes, my friends. I am beside myself with glee. Why? Stay with me here.

The Democrat party controls the House, and yet, they couldn’t pass the bill.

“WASHINGTON (AP) – In a stunning vote that shocked the capital and worldwide markets, the House on Monday defeated a $700 billion emergency rescue for the nation’s financial system, ignoring urgent warnings from President Bush and congressional leaders of both parties that the economy could nosedive without it.”

So, since the Democrats control the house, they should have been able to pass the bill on a party-line vote, correct? Wrong. 40% of democrats voted against the bill, and the Republican coalition fell apart, partly because of this divine gift of a speech that Nancy Pelosi gave before the vote.

This is the worst Speaker of the House in History: Remember, her approval rating has been as low as 14%. This time, however, she helped the Republicans snatch victory from the jaws of defeat. You see, the Democrats only wanted the Republican votes as a fig leaf to hide behind, and now hey have nothing whatsoever to hide their shame.

The Democrats who voted against the bill had an entirely different agenda than the Republicans who voted against it. Pelosi’s partisan beat-down forced enough Republicans to do the right thing to derail the bill, but for the Democrats, it was the lack of leftist provisions and slush money for leftist groups like ACORN that made them vote against it. Strange bedfellows, indeed.

So, the Democrats will have to offer up a far worse, more leftist version of the bill now; one that will be able to appease the hard left and pass on a party-line vote. That’s exactly what they are already planning to do.

“WASHINGTON (Reuters) – Democratic leaders in the U.S. House of Representatives are going to try to move another financial rescue bill after a $700 billion plan was rejected in a House vote, a senior House Democrat said on Monday.”

The thing nobody is talking about is that investigations are going to happen over this mess, and heads are going to roll. Almost all of those heads will have “D is for Democrat” on their foreheads. The first subpoenas have already been issued.

“NEW YORK (Reuters) – Fannie Mae and Freddie Mac, the U.S. mortgage finance giants that were taken over by the government this month, said on Monday they were subpoenaed for documents as part of a federal grand jury investigation into their accounting.”

Of course, the stock market has nose-dived.

“NEW YORK (AP) – Wall Street plunged precipitously Monday, at one point sending the Dow Jones industrials down more than 735 points as investors feared that the failure of the government’s financial rescue plan in the House will force the country into a worsening credit and economic credit risis.[sic- Beef]”

This isn’t the “worst” of it, however, as I’m virtually certain that McCain-Palin have no chance of winning the election in this climate – seriously, it would take a real Deus ex Machina miracle for the Republican ticket to win now, and I don’t see it happening – but even that has long term upsides.

Let Obama and Biden preside over the hearings, commissions, investigations, prosecutions, and convictions of their fellow party members. If McCain and Palin do it, everything will be, “A RethugliKKKan Fascist, Racist, Witch Hunt” /leftard. If Obama and Biden do it, it may lead to the mighty governmental collapse I’ve been praying for for the past ten years, and then the Democrats may need a generation or more to get back into power. And, trust me, they won’t look, sound, or smell like the Democrats of today when they do. And that, my friends, would be a very, very good thing.

UPDATE: Carl Rove, the magnificent bastard of the right, and ultimate boogeyman of the left, explains the vote to John Gibson, blow by blow.

More definitive proof, beyond all shadow of doubt, that the Democrat Party is directly, 100%, to blame for the credit crisis.

Don’t expect to see any of this on the PSM (Piss Stream Media).

Democrats are lying, evil, leftist, assmaggots out of hell. That’s a fact, not my opinion.