Worrying And Stolen: From Margo’s Maid

Margo’s Maid is very concerned about what is happening (just to the left of the camera) in this video. Specifically, watch out for 1:55.

Tonight Is The Night

Tonight is the night I find out whether a mythical event is possible.

I have two 600 gram jars of Vegemite.

I have a tablespoon.

I have a packet of Savoys (though hardly necessary).

It’s time to find out whether it is possible to overdose on Vegemite.

I also have a bucket, but you don’t want to know about that.

It Wasn’t That Good Anyway

First I’m gonna say, “What the hell man?!” because there is a fundamental flaw in the argument of whomever complained to the Australian Classification Board about an episode of Family Guy, where the character Death has sexual intercourse with a girl who dies after touching him in the back of a car. It wasn’t funny at all, although some parts of that episode did have merit.

But what I’m wondering is what kind of easily offended person would complain about that, and all I can figure is that they were letting their children watch Family Guy. And I am well aware that Family Guy screens both early in the morning, and at 6:45 pm at night. But a responsible parent should be well aware of the material (which is highly not safe for children), and have ruled accordingly. If you don’t know what the show is and whether it’s safe for your children, change the channel. It isn’t difficult.

It’s well known by anyone who has ever sat down and watched an episode that Family Guy is not afraid to show:

In fact, showing these themes is something that Family Guy wears as a badge of honour.

I’ll willingly accept that the episode in question should have had a higher rating, in case of those 14 year olds who are mature enough to accept some of the material on Family Guy, but in the end, it all comes down to the responsibility of parents. 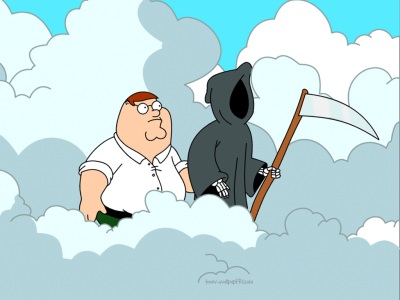