Well I finally managed to purchase a small jar of the new vegemite.

My thoughts? It’ll sell well because it’s not as…. pungent… as real vegemite.

Vegemite is not a taste that’s readily acquired, so anything that can grab a market is probably what they’re after with this new taste sensation.

Sure, it’s got a different texture on the tongue, and it tastes a bit cheesy, but it’s still vegemite.

The Godmother’s boy will eat it on toast or muffins rather than real vegemite, and Magilla’s been known to eat it on toast, but I prefer the original.

The idea with vegemite is to get them while they’re young, and they’re yours for life. I’m proof of that, as are probably 99.98% of the vegemite eaters you know. The rest are flukes.

Anyway, kids love vegemite and cheese sangas – I did as a kid – so these should sell well in the child cuisine market. How the product will survive the transition when the kids grow up is something we’ll see down the track, I guess.

Personally, I don’t like it. I grew out of vegemite and cheese yonks ago.

I can’t call it a condimental disaster, but it is a catchy phrase if I do say so.

T**t in a can, my next business venture

Working in the mining industry as I do, Im fully aware of the pressures on blokes away from their loved ones for weeks on end. Fortunately the crew at Pacific And Combined Oriental, PACO for short have come up with an innovative idea.

More below the fold, possibly NSFW, including a few pictures.

END_OF_DOCUMENT_TOKEN_TO_BE_REPLACED

No doubt this story will be blown up into a huge drama by the usual suspects, but its an interesting one just the same. Happened in a remote community near my home town. 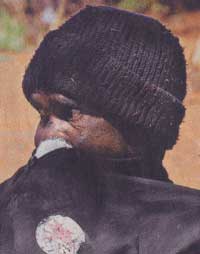 a stock picture, not the man involved.

The following is the local newspapers reporting of the incident.

Warburton man caught alight after police were forced to use a Taser stun gun when he allegedly ran towards them carrying a cigarette lighter on Monday.  (He was threatening the officers with the can of petrol and the lighter if my insider source is correct.)

A police spokesman said the incident occurred when police responded to a complaint at a house in Warburton about midday. (Petrol sniffing is a problem in a number of remote communities, most people want nothing to do with those actively sniffing, they are erratic and sometimes dangerous, the coppers were called by the householder to get rid of the bloke)

The 36-year-old man ran of from the house carrying the lighter and a container, believed to have contained fuel.

Police asked the man to stop, but when he failed to do so, an officer used his taser.

The man caught alight and the officer went to his aid, smothering the fire with his bare hands. (A balls effort by the officer involved, clearly shows he wasn’t wanting to hurt the man beyond stopping him)

While the officer helped the man, it is alleged an 18-year-old female threw rocks at his head. (Sadly not unusual, this happens quite often in remote areas, an officer attends, uses force, then the bystanders turn on him, they may have even been the people who called for assistance in the first place)

The effects on the body are severe, long term, and systemic. The effect is much like “chroming” in major cities, where kids inhale paint and other fumes.

Ive seen a few kids in Perth like this, silver instead of gold though.

it affects nearly the whole body.

More below the fold END_OF_DOCUMENT_TOKEN_TO_BE_REPLACED