the Future of Venezuela without Hugo Chavez? 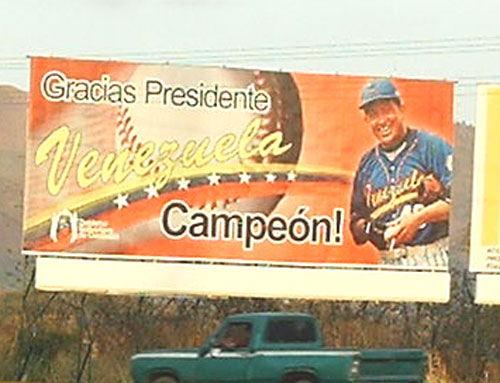 That giant baseball is flying straight towards Hugo’s head.

It references the fact that Venezuela won baseball’s Caribbean Series (Serie del Caribe) in 2006. I can only assume that the city government of Caracas put up billboards in the years that a Venezuelan team didn’t win blaming Chavez for not wearing his baseball uniform.

But now, with Hugo Chavez dead, how will any Venezuelan baseball team ever win again? Don’t worry, they have a plan :

Hugo Chavez’s body will be preserved and forever displayed inside a glass tomb at a military museum not far from the presidential palace from which he ruled for 14 years, his successor announced Thursday in a Caribbean version of the treatment given Communist revolutionary leaders like Lenin, Mao and Ho Chi Minh.

Obviously, in order to win future baseball games they’ll dress mummified Hugo up in a baseball uniform for all to see and thank. When the Olympics roll around they’ll put him in a brightly colored unitard for weight lifting, speedos for swimming events, put him in riding boots & duct tape him atop a pony for equestrian sports, and dress him in sequined tights for ice skating.

I, for one, am thankful that other world leaders don’t get into a sport uniform to associate themselves with other people’s success. Imagine Angela Merkel or Gerhard Schröder squeezing into a short tennis skirt and putting photos of themselves on billboards because a German won a women’s tennis championship.

It is amazing (but not surprising) that a government had thought that it had nothing better to spend money on than a suck-up billboard when sending him (if a toady felt compelled to be sycophantic) a thank you card would have been less expensive and Chavez would have been more likely to see it.

I think this image was found years ago at Devil’s Excrement.

8 Responses to “the Future of Venezuela without Hugo Chavez?”