Tim Blair has escaped (or been discharged) from hospital.

This is excellent news!

CAUGHT YOUTHENING: If John Edwards Fred Thompson did this, people would make fun of him. 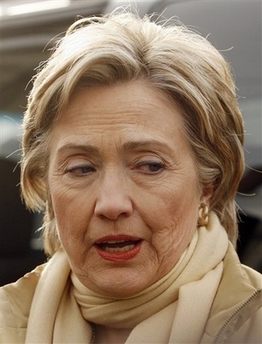 In a new campaign ad, the 60-year-old Hillary Clinton manages to lament the last seven years of the Bush Administration without looking as if she’s lived through it yet.

The wrinkles are gone, thanks to a blurry, soft-focus video technique patented by Barbara Walters (who hosts The View every day as if she is still alive).

Hillary may protest when she’s accused of playing the gender card, but would a male candidate get away with going to such extraordinary lengths to look young?

Here’s a bed everybody should have. (Also via the ever-prolific Instapundit).

I confess that a little over a year ago, Mr. H and I bought a bed from a place in North Carolina that makes custom-built mechanical beds. The years are stiffening the both of us up, so the bed was a logical choice. It has dual mattresses with controls to lift the torso or lift the legs or both, like a hospital bed. There’s also a vibration mechanism, just like the old Magic Fingers beds that you used to find in motels, only mine lasts 30 minutes instead of 15, and you don’t need quarters. The vibrations can be soft or more vigorous, and there’s even a wave function. It is indescribable how relaxing that is, and how addicted to it you can become. A push of the button, the soft purr of the motor, the vibration set to soft, harder, or wave, and I’m usually asleep in a couple of minutes.

To be sure, this bed cost only a tiny fraction of that super-duper 50K bed that does everything except sing lullabies to you (and maybe it does that, too). I fully admit, it’s a luxury, an indulgence, even perhaps a bit decadent. But frankly, my dear, for a good night’s sleep, I don’t care.

This is my first post here at Tizona’s weblog, and I’m grateful for having been asked.  Here’s hoping I don’t embarrass the Sword with my admittedly partisan and subjective blatherings (but, heh, it’s too late now, eh?), especially since I haven’t yet adequately researched all the features WordPress offers.  That’s my usual SOP, though, feet first, so please forgive any newbie mistakes.  I promise to learn. How better to start then, than by vilifying the people who manage to make my news cycle miserable on a regular basis?    Parade magazine has conducted a poll in which readers were asked to rank the most annoying celebrity.  Unsurprisingly, Rosie O’Donnell came in first with 44% of Parade readers’ votes.  AOL conducted a similar poll, and Rosie O won handily at 66% (rather surprising, considering the number of truthers, moonbats, luna-lefties, and assorted other denizens of the Twilight Zone that lurk on AOL), but it doesn’t help that she beat out the likes of Ann Coulter and Paris Hilton (both came in second), and Heather Mills.
She hit back, of course, because nobody disrespects The O’Donnell and gets away with it.  She agreed with the poll that she “might” be most annoying, without acknowledging why people would think so, and then she proceeded to rant against any and all while krill-surfing in her pool.  No doubt in Rosieworld, the readers who voted are probably members of that large segment of America who married their cousins and didn’t get past third grade anyway.
In smaller news, George Clooney won Parade’s “hottest” poll again, with  57% of the vote, with Matthew McConaughey second (27%), and Jake Gyllenhall third (10%).  Jake Gyllenhall?  How can they even tell he’s alive?
Halle Berry is with child.  No mention of a man, but I’m sure there is one.  Small tidbit:  she recently came out as a sufferer of Type I diabetes, the kind that usually strikes in childhood, although she didn’t know until adulthood.  That’s a subject I follow closely, so best wishes to her on that score.
There’s other tabloid news of course, so enjoy.  I generally don’t, because these are people I don’t even want to think about unless they’re appearing in a well-written, engaging movie or TV show that isn’t busy bashing America.  But I promised Tiz a subject, and this is it.
You will have to google the relevant links because I haven’t figured out how to link the ones I want and not link the ones I don’t want.  Sorry.